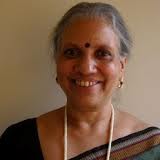 Tara started training in Hindustani classical music at the age of nine from Shri Narayan Rao Patwardhan and continued her musical education under Smt. Meera Khirwadkar and later, under Pt. Rama Rao Naik. She currently trains under Smt. Lalith J. Rao. Tara has been involved with music on many levels including composition of music for the stage, conducting music workshops and performing. She has also worked with filmmaker Shabnam Virmani in extensive research on the music and poetry of Kabir. In 2005, Tara was the music director for a new media performance that was produced by the Srishti School of Design at the ARS Electronica festival in Linz, Austria.

Tara has Master’s degrees in Education and Agricultural Physics and has earned a Visharad in Hindustani classical vocal music from the Gandharva Mahavidyalaya. She has taught Physics and Music to primary and high school students in Mallya Aditi International School for 20 years and is currently an independent consultant in Education and Music with several reputed institutions in Bangalore, Andhra Pradesh and Ahmedabad.